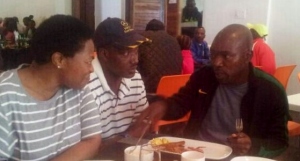 Breakfast Banter: So here’s how I’m gonna run this 90 kilometres…

This morning, Kim and I attended the annual pre-Comrades breakfast hosted by Alfred’s running club, Germiston Callies. We had no idea what to expect, but what I experienced was moving beyond anything I could have imagined.

The first thing that struck me was the sheer mass of people – it seemed like every single runner had an army of supporters, equally excited as the runners themselves. Whoever says running is a solo sport has clearly not attended a Comrades preparation meeting.

Alfred himself probably had one of the largest entourages, me and Kim among them, and it was so wonderful to meet his son, brothers and other family and friends. Alf is a popular guy among his fellow runners, and it took him ages to get from the front of the hall to the back, as he had to give out handshakes and exchange words at nearly every table.

The atmosphere in the room was palpable: it was as if you could feel everyone’s nervousness, excitement, and immense willpower. What struck me, though, was how happy everybody seemed. Distance runners must be some of the friendliest, most relaxed athletes I have ever met. Everyone was smiles and laughter, hugs and jokes. There was a really uplifting sense of camaraderie and warmth in the air. It was easy to spot the runners, not only by their lean physiques, but because they were the people with the biggest grins on their faces.

The first talk was given by a very successful veteran runner, and he had a wealth of stories and memories from racing through the decades. He spoke of how the marathon has changed through the years, from being so relaxed that one year a runner actually got misdirected by a marshal, and was declared the winner based on the fact that he had ended up running a longer distance than everyone else. 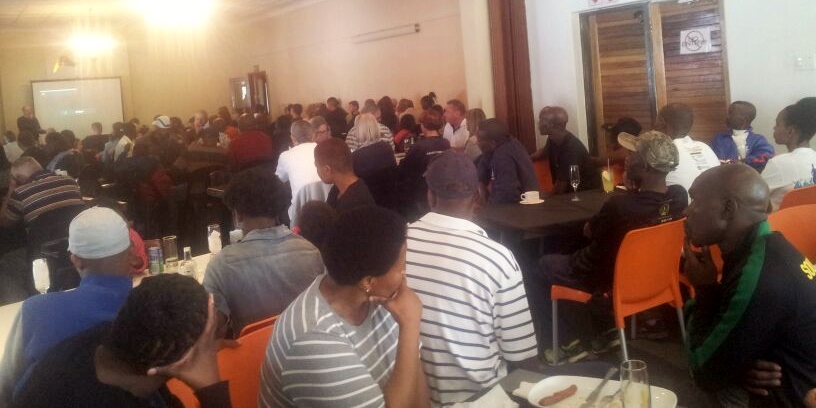 Absorbing some wisdom from a veteran

He had valuable advice for the team, from practical tips such as to avoid becoming distracted by all the fancy miracle cures at the registration expo, to advice for the spirit: “Keep moving forwards. Walk if you need to, but don’t stop. Nobody ever got from Durban to Pietermaritzburg by standing still.”

The next talk was by a qualified sports scientist, a Comrades athlete herself. She spoke of the importance of body conditioning, and gave examples of simple stretches and exercises that can tune your body to cope with a variety of different physical shocks, and can mean the difference between debilitating injuries and beating your best time.

Then the runners were called up one by one to receive their shirts. The first was presented to a man who had completed the race 25 times – that’s more years than Kim has been alive! Of course, Alfred wasn’t far behind with 13, and all the runners received huge rounds of applause as they made their way to the front.

One of the most touching moments of the morning for me was the presentation of shirts to the “semi-novices” – runners who had failed to complete the race, but were trying again. To me, attempting the Comrades in the first place takes guts, but to go back again after you have been beaten takes a special kind of strength, and these runners walked up proudly and full of determination. It was strange, but I felt really proud of these strangers, and humbled by their amazing perseverance.

We had gone to the event expecting tradition and practical details, but what I experienced was a bustling gathering of some of the most modest and strongest-willed people I have met. I think running the Comrades changes you – when you push yourself to the absolute limits of human endurance, and do it by choice, you must feel like you can face anything life throws at you. To dedicate yourself so unwaveringly to such a daunting goal, to endure excruciating pain, squash your doubt and fear, and go back again and again, is to take full advantage of the heart that beats inside your body, and the soul that you were born with.

I am very grateful to Alfred for inviting us to take part in this wonderful experience of a lifetime, and it is inspirational to realise that everyone is capable of unbelievable feats of greatness, as long as they stick to their decisions and stand up to their fears. If you’ve never had a chat to a Comrades runner, I highly recommend it – this is truly a special breed of person, and I guarantee it will put your struggles into perspective. I am so proud of Alfred, and the lessons I have learned by watching him prepare have taught me more than I ever expected when we started writing this blog. I wish him absolutely everything of the best, and he goes with all the faith I can muster.

6 thoughts on “So much more than a race!”